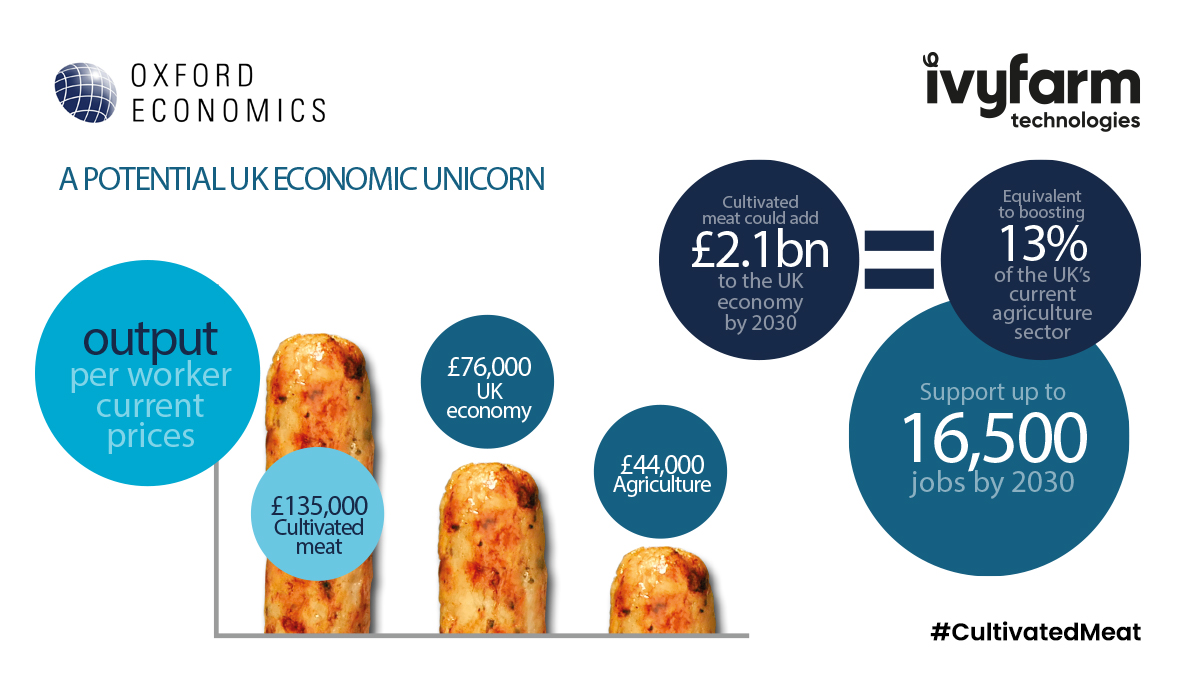 OXFORD (30 September): The UK risks missing out on a £2.1bn windfall if it delays giving the green light to Britain’s emerging cultivated meat industry, according to a report issued today.

The new figures reveal the sector is also primed to provide up to 8,300 new highly-skilled UK jobs – with the same again generated in the broader supply chain – by 2030 as consumers start to embrace sustainable meat produced without killing animals.

According to the study authored by researchers from forecaster Oxford Economics, hitting £2.1bn gross value added (GVA) contribution to UK GDP in 2030 would mean cultivated meat was singlehandedly accounting for 13% of the cash pumped into the UK’s economy by the agriculture sector.

The industry would also boost tax coffers by £523m – but only if UK regulator the Foods Standards Agency (FSA) rubber stamps its approval for sale in the UK by the end of next year and allows the UK to catch up with other countries that are already supporting the sector.

UK cultivated meat pioneer Ivy Farm Technologies commissioned the study as part of its drive to help ministers understand the potential of products made with real meat – but with a fraction of the carbon footprint of traditionally farmed livestock.

Currently, nearly half the worldwide harvest is required to feed the livestock population and scientists have called consumption of meat the “6th mass extinction event” due land clearance and its direct and indirect contribution to increasing greenhouse gases.

Oxford Economics researchers looked at the economic contribution to the UK based on solely domestic consumer spending on cultivated meat in the year 2030 and found:

Ivy Farm Technologies CEO Rich Dillon said: “This is the first time a definitive economic dataset has been calculated for the UK’s cultivated meat industry and we’re urging the government and the FSA to study the report carefully. If we don’t move quickly, countries like Singapore that have already approved cultivated meat for consumption will leave us in their wake.

‘The environmental benefits of producing real meat without livestock farming are well understood, as are the animal welfare and human health advantages. And we know that consumers are ready to try it and buy it.

“Now we have the missing piece of the jigsaw that fills in the economic benefits to the UK. If we can release the handbrake and seize the ‘first mover’ advantage, the UK can become a powerhouse for alternative proteins, exporting our products and technology across the globe and reducing the UK’s reliance on imported meat.”

Oxford Economics Director of Economic Consulting, Henry Worthington, said: “Our analysis has highlighted the cultivated meats sector’s strong potential for growth within the UK and the substantial economic footprint that the market will support through the value chain.

“Strikingly, from whichever angle you look, the public policy rationale for regulatory approval of cultivated meat appears compelling, from “net zero” to the war against obesity to building a more research-intensive economy, this industry aligns seamlessly with stated government policy objectives.

“The industry may be in its infancy now, but it clearly presents significant opportunities for entrepreneurs, investors, and other commercial partners to exploit the global potential of a move away from conventional farming towards more sustainable methods.”

The company plans to become the first commercial producer of sustainable, cultivated meat in the UK and put Britain on the map in the emerging global industry by producing cultivated meat products – beginning with a slaughter-free sausage – for supermarkets and the restaurant trade from 2023.

This year the company launched a £16 million fund-raising to build a pilot R&D facility in the first step towards producing 12,000 tonnes of cultivated pork a year by 2025 – equivalent to saving the lives of 170,000 pigs.