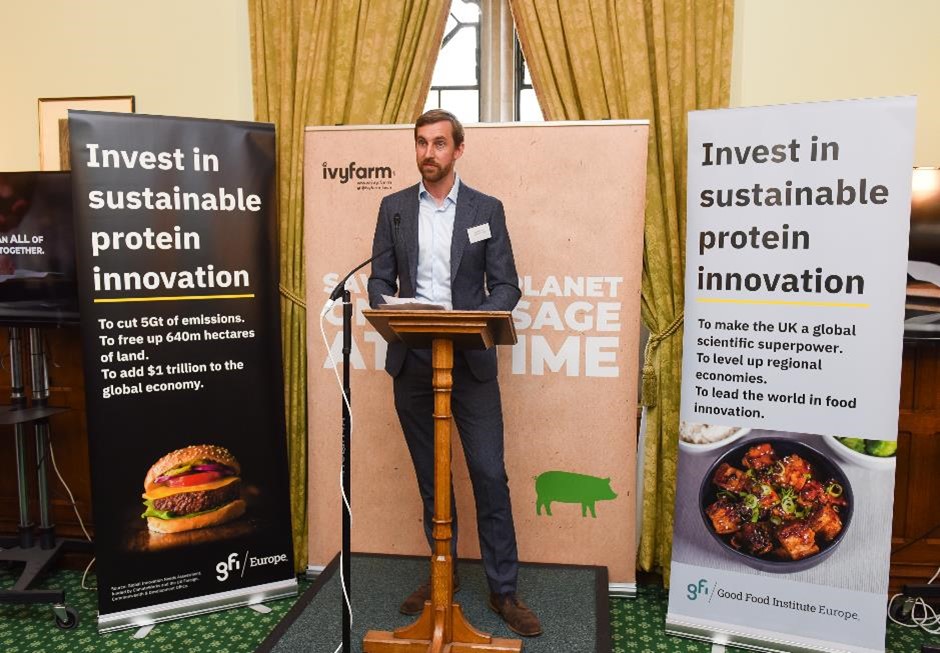 At an event held in Parliament yesterday, cultivated meat start-up Ivy Farm Technologies and the Good Food Institute Europe (GFI), laid out the need for a more collaborative regulatory process, and greater investment in research in the UK’s cultivated meat sector, to avoid missing out on its economic and environmental benefits.

The event featured MPs and peers from across all parties, eager to learn more about the science and discuss the need for an enabling regulatory framework so Britain can assert itself as a ‘world-leader’ in the burgeoning alternative protein sector. Cultivated meat is real meat like beef, pork and chicken – but grown from animal cells in cultivators.

Guests at the event, which was hosted by Anthony Browne (Conservative MP for South Cambridgeshire), heard from Ivy Farm co-founder Dr Russ Tucker and Elena Walden,Policy Manager at the Good Food Institute Europe, about how cultivated meat has the potential to be a gamechanger, for the climate, for food security and for the UK economy. But these benefits will only be realised if we move quickly.

The cultivated meat sector also has the potential to contribute up to £523m in tax revenue and provide £2.1bn to the UK’s economy by 2030. Research by Oxford Economics suggests the industry can also create almost 16,500 jobs, including 8,300 highly skilled jobs over the next decade.

Dr Tucker highlighted the enormous benefits of supporting the sector in the UK: “The UK government is a leading power in the global fight against the worst effects of climate change, and by adapting the way we farm and eat we can make a huge impact on how well the nation rises to this challenge. But the cultivated meat industry doesn’t just have huge environmental benefits, it also presents some great economic opportunities, too.

“It is therefore absolutely crucial that we have the regulatory framework to support its growth and to make the UK a world-leader in food technology. Without that, the UK is in danger of being left behind or worse still, UK companies will be forced to set up abroad.”

Elena Walden, Policy Manager at the Good Food Institute Europe, further stressed the importance of the need for greater investment in this space: “It’s impossible for the UK to reach net zero by 2050 without addressing emissions from our food system. But there’s no need for ministers to impose restrictions on what people eat. Cultivated meat can deliver the meat people want with a fraction of the environmental impact, while freeing up land for more sustainable farming, and creating green jobs across the UK. “But to realise these benefits, the government must invest in open-access research to accelerate progress and ensure our world-leading universities are at the forefront of sustainable protein science – just as they did with renewable energy.”